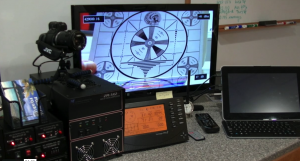 Amateur television (ATV) is the transmission of broadcast quality video and audio over the wide range of frequencies of radio waves allocated for radio amateur (Ham) use.[1] ATV is used for non-commercial experimentation, pleasure and public service events. Ham TV stations were on the air in many cities before commercial television stations came on the air.[2] Various transmission standards are used, these include the broadcast transmission standards of NTSC in North America and Japan, and PAL or SECAM elsewhere, utilizing the full refresh rates of those standards. ATV includes the study of building of such transmitters and receivers, and the study of radio propagation of signals traveling between transmitting and receiving stations.

ATV is an extension of amateur radio. It is also called HAM TV or fast-scan TV (FSTV).

The DATV-Express is a digital Amateur TeleVision exciter/transmitter (assembled board with software) that can operate on ham radio bands from 70 MHz to 2.45 GHz.

A small group of Amateur Radio Operators involved with Amateur TV (ATV) who have come together to provide an economical answer to the question that hams interested in digital-ATV have been asking for a long time: Where can I economically purchase MPEG2 / H.264 encoder boards and Digital-ATV exciter boards?

The cost of commercial-grade digital-TV boards is even higher. This high cost is known to prevent many hams from trying Digital-ATV. Because of this, a group of hams in the US and England got together at the end 0f 2010 to start a project that will lower the cost of DATV considerably.